I heard this on the morning news...

Sometimes, we need to be a little proactive - so, new rule: when you hand over your car keys to the valet, make sure you take your other keys off the keychain! If you're like most people, your registration's in the glove box, so if you hand over all your keys, you might as well put the welcome mat out at home for them too. Don't make it easy for anyone to make you a victim - if they have to go the extra step, it's not worth it to them.
Posted by Paula K at 11:10 PM No comments:

Where to start... Well, work's keeping me busy, which is both a blessing and a curse. M's bday was yesterday and I got him this. Of course, he's convinced he's cursed and to further enforce that feeling, the lightsaber I gave him had SFX that were super quiet. We just thought that was the way it was, until Squishy opened hers and it was LOUD! So, now I have to exchange it for him. Does that make me cursed for being with him? ;-) Or is he cursed for being with me?

I dragged M to a dolly meet over the weekend. It was good to have him meet everyone, but I think he was extra sullen just to prove the point that he hates meeting people. Ah, well. We're similar that way - the first two dolly meets, I sat in the corner and barely spoke, and now you can't shut me up. Some people want to castigate me for it, as though it were a character flaw to be shy in group settings. Me, I need time to get to know people - it's part of being a middle-child - I have to weigh all options before I can act.

I've also been knitting loads of things. I've finished doll hats, and that's about it. Those don't take me too long, and the look really changes depending on the yarn I use. I did take a picture of Clancy (V-Smash) and Rowan (LM) at the dolly meet at Chez Snoop in some knitted goods I made recently. 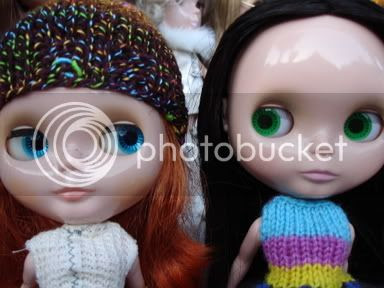 The hat's really cool - made from Noro yarn. Snoopygirl wanted to buy it off Clancy, but I told her I'd pick up some more of the yarn and make her one of her own. And that's just what I did. Here's a pic of the skein that arrived today: 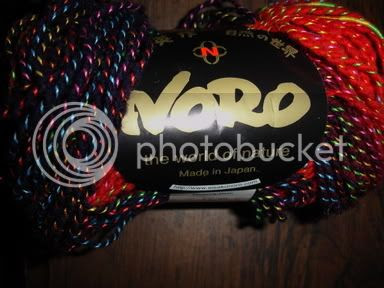 It was supposed to be two skeins, but only one was in the envelope. I emailed the seller and am just waiting to hear back. I really hope it was just an oversight on their part...! If I were M, I'd probably think this was yet another sign of the universe conspiring against me. Hehehehe. When in reality, it's probably just a matter of someone not taking the time to double-check the order before shipping. And if it's not an oversight, I'll be filing a claim with Paypal faster than you can say "fluffer-nutter". Mmmmm, fluffer-nutter....
Posted by Paula K at 11:33 PM No comments:

I scored 2 Dollybird mooks (yes, you read that right - it's a combo magazine/book, hence "mook") off ebay and got them just today. OMG - I wish I'd known previously how absolutely fantastic they are! In the back, there are patterns for the doll clothes you find scattered throughout the pages, and illustrated instructions (a very good thing, since I can't read Japanese - yet!). I have 2 more in the mail to me from hlj.com, and now that I've seen these two, I am so excited to receive the next two! I think I may even try to get other past issues, just to complete the *collection*. Oh, ebay, why are you so cruel to my wallet?

Here's a picture of the two I received today: 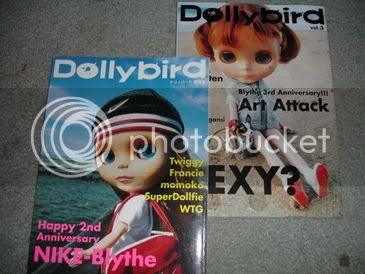 Now, if I could just find the time to do a little sewing.... I'm just grateful that knitting is so portable! I've got loads to photograph and post - I know I keep saying that, but it's true.

On the Blythe doll front, I am currently up to (OK, this is embarassing): 20 dolls. It would have been more, but I gifted one to my mom who fell hard for my first semi-custom, Emma (I wasn't even done, but mom liked her just as she was and I couldn't say no to mom), and sold the other. Of course, now I'm thinking that was stoopid to sell her as she really would have made a great custom, but I don't think I would have had the heart to customize her at the end of the day. And, the girl who bought her seemed to really want her (and then I found out she turned around and sold her within a week of buying her - poor little maligned Georgie!). So, there is a pang of guilt there, but in the end, she needed to be with someone who loved her more than me.

I haven't posted any of my new dolls in awhile, so I'm sure that number must seem shocking. It's shocking to me, too, and I have them! Anyway, here are two of my latest girls (just to slowly get caught up with my posting)...

First, is my second BL girl, an FAO Schwarz Hollywood named Teague. Last Saturday, Teague joined M and I for dinner at Outback and yearned to try a piece of the Chocolate Tower (aka the world's best chocolate cake - which, oddly enough, looks like a bloody steak in this picture. Hmmm...): 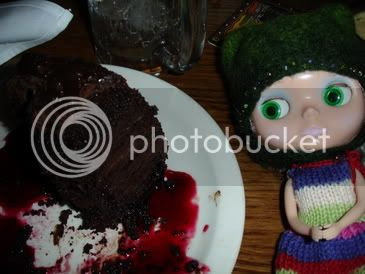 FYI - Teague is sporting a Euro Trash Fashion Kitty Helmet (thank you, Ruth!) and a knitted dress by me

Second is my second custom - a Cherry Berry named Meredith (I couldn't help it, I love Grey's Anatomy), who I'm in the process of customizing to look like a Rosey Red. I've already swapped her body for a Licca, sand-matted her, cut her hair and painted red lips (though I'll re-do those shortly - I'm a bit of a perfectionist about these things). I only have to boggle her eyes and twist her scalp a 1/4" and then she'll be done. That probably sounds like gibberish if you don't know Blythe, so just pretend I said something clever, nod and add in an "ah huh" every once in awhile and everything will be fine. Anyway, here's a pic of Meredith supporting the cause for more Farrell's Ice Cream Parlors: 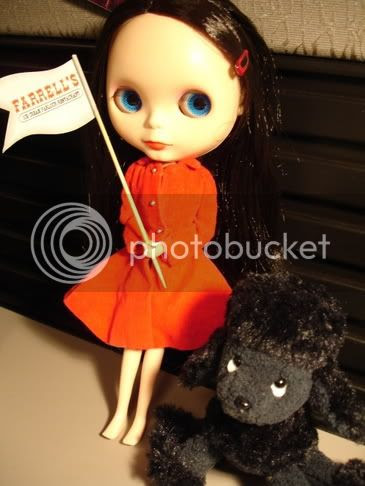 Do you think I possibly have a thing for dolls and sweets? Hmmm... I guess some things never change no matter how old you get ;-)
Posted by Paula K at 11:34 PM 2 comments:

Some things in life are serendipitous, and the story of how The Bituminous Coal Queens went from being a small pageant in southwestern Pennsylvania to a documentary available on DVD this Tuesday from Netflix is one of them. The producers, Patricia Heaton and her husband, David Hunt, were at dinner with actress Sarah Rush a few years back when Sarah mentioned she was going back home for a reunion. "High school?" "No, the 50th anniversary of the Bituminous Coal Queens of Pennsylvania." And thus was born the three week prep and ten days of filming that would become the documentary of the same name.

I was lucky enough to be at the Netflix screening at the Egyptian Theater in Hollywood today, and recommend everyone put this documentary in their Netflix queue. I promise you won't regret it.
Posted by Paula K at 9:07 PM No comments: