I came across the Stella McCartney collection for Gap Kids about a week or so ago online. The clothes are a little pricey for a kids collection (IMO), but very well priced for Stella. If you're not familiar with her, besides being the daughter of Paul McCartney (aka one of the Beatles), she also brought the design house Chloe back from the brink in the last decade. She really has her finger on the fashion button in terms of being both fashion-forward and wearable.

Anyway, I was at Fashion Square with my little sister today taking a break from the rest of the fam, and we poked our head in to Gap Kids to check it out. It was a wee bit crowded in there, so she got on line while I perused the collection. I loved the cashmere pullover with the intarsia leopard, but it was far from practical in real-life (and for something I wouldn't wear often, $98 is a little expensive). 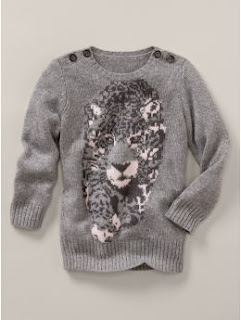 I did, however, find a grey asymmetrical cardigan in kids XXL that fit me just right. For the price, $58, I couldn't go wrong, and I will even go so far as to say this is my new favorite sweater! I fully expect to wear this until it falls apart. The cotton/cashmere blend also make it feel really nice. Did I mention I'm excited about this? I really am, like, stupidly so! And, I can forgive the XXL tag by reminding myself that it's a KIDS XXL, not women's! Muahahahaha 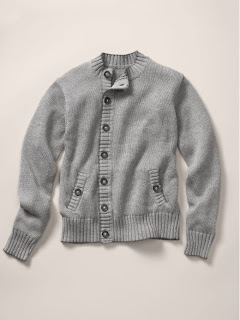 I'm not a huge fan of episodic TV - miss a week and I'm Lost (no pun intended). That said, I do occasionally fall for shows - HARD. Usually, the ones I like get canceled - Square Pegs, anyone? What about TV 101? (Yes, there are more recent examples, I'm just drawing a blank). I adore most of the sci-fi on BBC America (Doctor Who, Torchwood, Life on Mars, Ashes to Ashes, Being Human, Primeval), but not so crazy about the period pieces (Robin Hood, for example - too soap opera-y and they killed Marian, wha???). I despise reality TV shows, to the point that I feel they suck the life out of you and are hastening the demise of Western Civilization (merely MHO, of course! Others LOVE them, but I'll just continue staging my one woman boycott to make myself feel better).

So, the reason I'm posting is to say that I really like Flash Forward and don't want it to go away! The pilot was intriguing, and there was enough there to make me want to see where they're going to go with the idea. Oh, and Joseph Fiennes is cute, which never hurts ;-)

The only other show I'm interested in catching is V, though I missed it Tuesday when I went to Disney Hall. Still, I'll catch up over the weekend on abc.com and see how I feel. I liked the original version way back in the day, and the kid who played the lead's son sat behind me in French class that year, which made it that much cooler.
Posted by Paula K at 9:52 PM No comments:

Ah, Wednesday, that un-special, middle of the week, hump day. Half way through the week already (thank goodness!). I really ought to be sewing, but am procrastinating while watching TV. I wish I could craft as fast as I come up with ideas, but have to remind myself: It's the process, not the finished product that makes it enjoyable. That said, I've finished quite a few knitted projects over the last two weeks that just need blocking/sewing together. I'll get it all done eventually...

Anyway, not feeling particularly verbose this evening, so will sign off for now...
Posted by Paula K at 10:01 PM No comments:

I'm a little late today, but I'm still up from yesterday - does that count? I stepped out of my comfort zone today and spontaneously agreed to go to listen to chamber music at the Disney Hall in downtown Los Angeles. My friend, R, had amazing seats down in front and we had a great time. I've only had the pleasure of knitting with her every month or so, but going out outside of knitting was a good thing. Turns out, we have quite a few things in common! Anyway, I'll leave it brief for tonight, but just wanted to share a little something from my day.
Posted by Paula K at 1:25 AM No comments:

Now, don't get too excited, but yeah, I'm back for Day 2 of NaBloPoMo! Today's theme is Make It/Mend It Monday. On the mend it front, I fixed the hem on my favorite pants. They'd only hung out in the mending pile for a month or so... (sad, I know). I really do love those pants, and anyone who has met me in person knows this, as I wear them every chance I get. They're brown linen palazzo pants that I made from a New Look pattern. In fact, they're my second pair since I loved the first ones so much, I wore them until they fell apart.

On the make it side, I made a top from a vintage 1980s Simplicity pattern (design by Hang Ten - remember them?). I finished the top a couple days ago, and am already in love. The thing to keep in mind here is there was some serious wardrobe refashion involved here. NxtDrGuy gave me a periwinkle T-shirt with holes and a stain (artfully covered by the pocket!), and I proffered up a navy workout T-shirt, and a remnant of darker periwinkle ribbing. I'm seriously in love with the outcome, and if I could get away with wearing it everyday, I would. 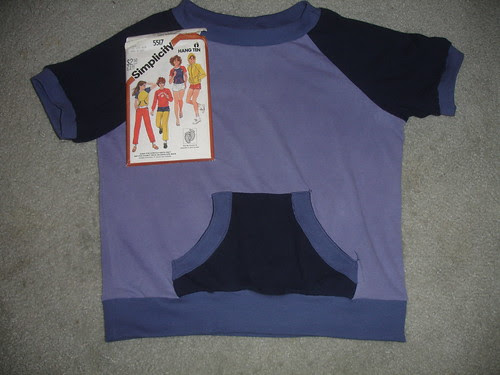 Up for the challenge

I've been a little lax on the blog front (work stuff has kept me busy for the most part, which would be too boring/technical/eye-glaze-inducing for all but the nerdiest out there to get into here), and so have decided to participate in the NaBloPoMo* this November in order to shake me out of my quietude.

Perhaps, the easiest way to get back in the groove would be to have some themes going... For sure, I will post some of my crafting projects this month, as I really need to get back into that habit. My fear is that I will post all my good intentions here and then not follow through. That would hardly be fair and certainly wouldn't make for very interesting reading. Oh, and since I've been promising to post some Blythe knitting patterns, I will publish those this month (sorry, Kittenlash, I really haven't meant to drag this on for so long!).

Okee dokee then, that's gonna have to do it for today, but I'll be back tomorrow, I promise!