A couple of weeks ago, I was tooling around flickr and saw this skirt. I thought, "Gee, that looks like a skirt in the first issue of Stitch magazine." Well, lo and behold, they are the same! For some reason, I never put the designer of the skirt pattern, Jenny Gordy, together with her line "Wiksten." Anyway, I decided to give the pattern a spin and make one of my own.

These are the results: 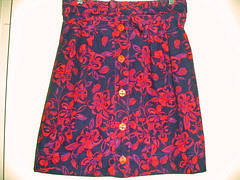 I have to say, I'm pretty pleased with how the pattern turned out! My measurements put me in between a small and medium, so to be safe, I went for the medium. Well, for once, my erring on the side of caution means my skirt is a little on the big side (but, hey, it's easier to take things in than let them out, so even though it meant an extra step in my case, it was the wise choice). Instead of ripping the skirt apart to take it in on the sides, I just took it in up the back.

Jenny mentioned a few errata in her blog, but I noticed a couple of minor things as I went along - the arrow directions for the pleats on the front are incorrect (I just followed the photo of the finished object), and the grain line on the pattern for the front and back pieces are swapped.

Details:
Fabric - a 100% cotton corduroy from Joann's. I pre-washed it, and cut it out with the nap going up (gives a richer color).

I didn't feel like doing as much hand-finishing as Jenny's pattern calls for (I like instant gratification and hand sewing is avoided like the plague at chez NDG), so I did a lot of extra top stitching, which really works with the fabric I chose. This included topstitching the placket closed, and also edge stitching the center front edge of the placket. I did the same thing on the wasitband - both topstitching it closed and edge stitching the top. I guess I could have edge stitched the belt, too, but it didn't dawn on me until this moment. In addition, I also pressed up the bottom of the waistband facing prior to attaching it to the waistband for a neater finish at the front edge. I also added a button to the waistband, and one more at the bottom of the placket. I would probably do that again, but I debated between horizontal and vertical placement on the waistband and well, I'm still not completely sold (but it's better than hook and eyes, which I've never been very good at getting to sit right).

I will definitely be sewing this again, and love the fact that this skirt lets me be a size small!

Oh, and because I cut the belt out along the grain, I had almost half a yard left over, so I'll be making a tote bag for my knitting projects. Win win all the way around.
Posted by Paula K at 1:04 PM No comments: