This is what happens when I'm bored.

Sounds about right. The only difference is: Rosebud will not be a sled, it will be a Blythe! 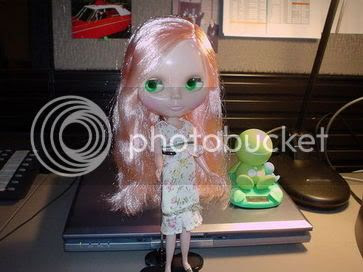 No, I'm not all mellow - I'm actually miserable 'cos it's so freakin' hot, but to pass the time, I've been knitting in the line of AC. I've finished the hat part of my full-size Jayne Cobb hat (a character from Serenity and Firefly - hence the name of this entry) and finished the entire version for Blythe. I really like the way it's turned out and think I might make some more to sell. We'll see what people think before I get my knitting freak on...

Here's the pic of Leia, my Cherry Berry modelling the hat. I think it's one of the nicest things I've ever designed. 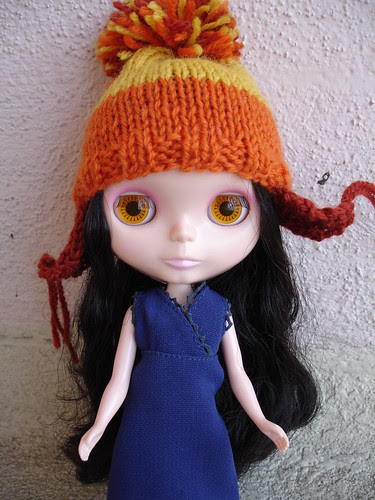 In case you're not familiar with the whole Browncoat cult of Firefly fans, it's supposed to look like that (ie - ugly and handmade).

Well, off to finish the full-size version - just have the ear flaps and pom pom to go...
Posted by Paula K at 2:38 PM No comments:

Last week, I went to my bro's to hang out with him and visit with my nephew (gaaaa - he's so cute!). We were channel surfing, and I see the name of the game show I was on 4 years ago on Game Show Network. I tell A to turn it on because "wouldn't it be funny if it were the one I was on?" Well, he flips to it and and we both screamed - there was my head filling the screen! So random! I've switched on GSN occasionally to see if it was me and for all the times I did that, I never saw me. And then we turned it on and there I was. What are the odds?!?

I'm supposed to be neatening up the apartment, but fcuk it, it's hot and the computer is right in line with the AC, so if I sit here, I feel slightly cooler than elsewhere in here. At least I can post and then I'll feel like I got something done :-P In fact it's so hot, the water coming out of the cool tap is so hot the cats wouldn't even drink from it. I ended up having to put their bowl in the fridge before being able to give it them.

I went knitting with mom and my aunt this morning at our LYS. It was so crowded and loud in there - not really relaxing, but I did finish a knit hat (which I think I'll give to M) and made one for Blythe from the leftover yarn. I should have enough hats to start selling in another week or so. I love doing them because they knit up in half an hour and then I can tell people I got X number of projects done this week (as opposed to my sweaters which are all languishing in various states of *undoneness*, causing me to say I got nothing done this week). I brought my mini ipod and noise cancelling headphones to the LYS, but didn't use them until one of the owner's mothers sat next to me and was talking so loudly it made me tense up. I forgot I had the Katamari Damacy soundtrack on there, so that was a nice surprise and at least had me smiling rather than scowling like I'd been doing.

I think I'll go empty and reload the dishwasher now and then sit on the couch and veg with a couple dvds and my knitting. I may even do a load of laundry. I really am that boring sometimes! But, sometimes you gotta do what you gotta do, y'know?
Posted by Paula K at 4:03 PM No comments: