So many things... I'm supposed to be finishing up my 2nd craftster swap (apologies to my swap partners - your stuff will be rad), but frick, it's hot and I've been rearranging all my crap today and I've realized I HAVE A LOT OF CRAP! Not that I didn't know that before... But, somehow moving it around to try to organize it just makes the problem so much more obvious. I'm annoyed with myself for letting it get this bad, and annoyed that work has been so busy that I haven't had time to fix it. Ugh.

On the plus side, I finished a project and wanted to share - it's knitty's fetching: 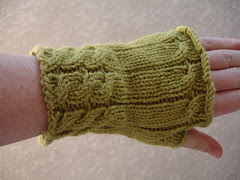 I think I should concentrate on the shorter projects as, well, they go much faster! :-P Though, I do get supreme satisfaction out of finishing the more involved projects on my list, they just take forever to do...
Posted by Paula K at 6:13 PM No comments: