A couple years ago, Anthropologie had a hat on their site called the St. Germain beanie.  I immediately fell in love with the style - a spiral design with beads - and decided to recreate it using Paton's classic roving in a sunshine yellow (minus the beads - I'm not really a bling kinda gal).  I love that thing!  At the time, I wrote up some notes with the idea to publish a pattern and then got busy with life and let it sit.  Cut to now and I decided to do just that.  I bought another skein of Paton's classic roving and test knit my notes (and recreated part where I just figured I would remember what I did - oy, when will I learn?).

So, project 02 of 52 is the test knit of a pattern I'll be publishing on ravelry soon!  My friend, Sandra, was the first to say she wanted it when I posted a pic on Facebook, so the sample will be hers (or she can pic any color she likes and I'll knit her one because she's knit-worthy like that).

Here's a pic of the latest version (there are two lengths - one is skull cap length and this one is floppy beanie): 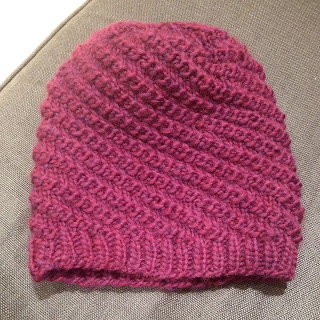 I finished the first two projects on my list last weekend and have only just had a chance to sit down and blog about them.

The first project of the year was Design 16 from Noro Collection #3 by Jenny Watson .  I used Noro Kureyon sock in shade 220.  I'm a fan of Noro and their colorways, but the Kureyon sock was rustic feeling (which I like) and thick and thin.  I happen to love that about their yarn, but others prefer to knit with something softer.  I was able to match the fronts and the sleeves, but it wasn't easy.  A couple of my skeins had knots where the colors would make a sudden change and I had to get creative to keep things matched.  Pretty irritating for a yarn that isn't cheap.

No matter, for all the stockinette and ribbing on teeny tiny needles, I love the end result.  It will, however, be awhile before I knit a sweater with such small needles again (in fact, I may have something going on size 15s as a palate cleanser).

Here is the finished product - I just need to pick out the buttons and sew them on before I wear it. 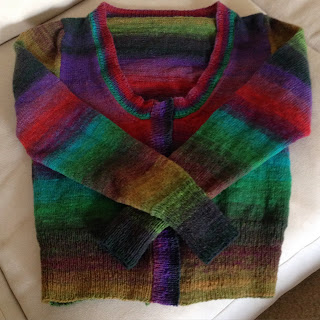 I have plans to make a Burda a-line skirt in denim to go with it.  I think it will be very Boden-esque!

About a year and a half ago, I challenged myself with a project called, "52 projects in 52 weeks" in order to get over a crafting slump (and finish some UFOs I had laying around at the same time).  I ended up completing the projects in nine months (bit of an over-achiever here).  At that time, I took some time off from posting daily outfits and FOs on Instagram and Facebook because I wanted my next project to be purposeful and a tiny bit planned (enough with the fly-by-the-seat-of-my-pants crafting!), which brings us to the beginning of 2016 and the idea I had for my next project: 52 projects in 52 weeks - handmade wardrobe edition.

The idea is just as simple as it sounds: I am going to make 52 projects over the course of the next 52 weeks (aka all of 2016) that will be incorporated into my wardrobe (I might throw a few pieces in for my boyfriend because he's pretty awesome and craft-worthy).

Some backstory: a lot of my wardrobe is already handmade by me, so this isn't some unattainable idea I have (where would be the fun in that?).  I always tell people, "Set yourself up to succeed, not to fail."  And that is what I am doing here.

The idea for me is to make the things I need in my wardrobe rather than buy them.  I've needed a new winter coat for the last 3 years, so that was a natural.  I also need a new raincoat.  And so on and so on, etc., etc.

Here is a sneak peek at the list I'm putting together.  I fully expect this will change organically over the course of the year and after my last challenge, I do not expect to end up keeping everything I make (sometimes the idea of something is better than the reality).  Either way, I look forward to the challenge and hope you'll join me on this journey. 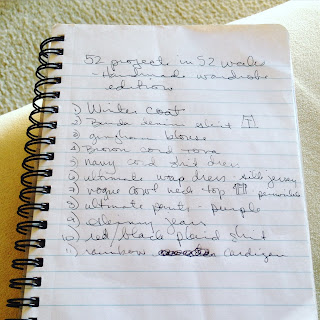